What is the working principle of an electric iron?

Home / News / Industry News / What is the working principle of an electric iron?

How Can We Help You ?

We will reply you within 24 hours in working day.

What is the working principle of an electric iron? 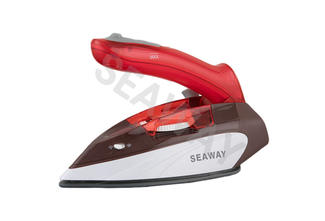 Extended information
The ancients put red-hot charcoal in the iron before ironing. "In the early ancient irons, in order to prevent hands from being scalded, a wooden handle was inserted at the rear interface of the iron. The shape of the iron after the Ming Dynasty has undergone a qualitative change, the casting technology is higher, the shape is particularly beautiful and atmospheric, and it has the shape of a dragon head and an official. The hat-shaped and diamond-shaped edges are so beautiful. By the time of the Republic of China, the style had already had the prototype of a modern electric iron, which was more scientific, practical and environmentally friendly to use. The material selection was mostly water-red copper before the Ming Dynasty, Qing Dynasty and the Republic of China Most use brass.
Ancient irons were mostly distributed in the east and southwest of our country. Regardless of the dynasty, the "Warring States ornamentation" was basically the beauty. The two have significant differences in craftsmanship and materials. The ancient irons in the eastern Jiangsu and Zhejiang regions are relatively heavy, while the Yunnan and Guangxi Guilin regions are lighter in weight and thin in material. They are more beautiful in carvings and are naturally more expensive. "In ancient times, irons were generally only affordable by wealthy families. Yes. From the Han Dynasty to modern times, almost all irons are made of copper, and there are not many changes in the shape and design. They all look like a water scoop.
Except for the irons of the 1920s and 1930s with enamels and lids, the rest of the irons from the Han Dynasty to the Qing Dynasty were all black without a lid. The principle of these irons is to place burning charcoal in a container, and iron the clothes underneath with a high-temperature and smooth bottom.

PREV：How to clean the soleplate of an electric iron?
NEXT：How to maintain the iron?